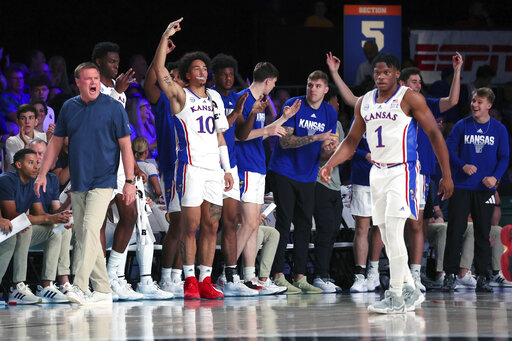 Dick had 18 on six 3-pointers in the first half before going 1 for 8 from the field after halftime. Jalen Wilson added 19 points and 11 rebounds for the reigning national champion Jayhawks (5-0), who blew an eight-point halftime lead and a nine-point second-half lead before grinding it out in the final minutes.

N.C. State played a fast pace, picked up full court and stayed within arm’s reach of Kansas the entire way but couldn’t take a second-half lead even after tying it five times, the last coming at 63-all on Jack Clark’s jumper with 7:14 left.

LJ Cryer had 16 points for the Bears (5-1) to follow up three consecutive 20-point games that garnered him Big 12 player of the week honors. Three days after a career-high 28 points in a win over then-No. 8 UCLA, Cryer had two 3-pointers and a jumper to push the Bears to a quick 10-2 lead.

Jonathan Massie and Zach Scott each had 12 points for McNeese State (2-4). All of Scott’s scoring came on four 3-pointers.

LAHAINA, Hawaii (AP) — Oumar Ballo dominated inside with 30 points and 13 rebounds for Arizona, which held off Creighton to win the Maui Invitational for the third time.

The combination of the unstoppable 7-foot, 260-pound Ballo and his speedy, talented supporting cast was just enough for the Wildcats (6-0) to remain undefeated. Kerr Kriisa added 13 points and nine assists, Azuolas Tubelis had 12 points and Courtney Ramey scored 10. Arizona scored its final points with 2:21 to play but managed to hold on.

Ryan Nembhard scored 20 points for Creighton (6-1), which was trying to beat a ranked opponent for the third straight day. Ryan Kalkbrenner added 16 points, Trey Alexander scored 15 and Baylor Scheierman had 11 points and 11 rebounds.

BLOOMINGTON, Ind. (AP) — Race Thompson scored season-high 20 points and had eight rebounds despite being bloodied in the first half, leading Indiana past Little Rock.

Freshman Malik Reneau had 10 points and six rebounds in his starting debut and Xavier Johnson finished with nine points and 10 assists for the short-handed Hoosiers, who are 5-0 start for the second straight season. Preseason All-American Trayce Jackson-Davis sat out with a sore back.

Myron Gardner, the reigning Ohio Valley Conference player of the week, had 14 points, nine rebounds and six assists for the Trojans. D.J. Smith scored 20 points to lead Little Rock (2-4), which has lost all three in the series and is 3-13 against Big Ten foes.

The Wildcats (4-2) easily recovered from an 88-72 loss at No. 6 Gonzaga Sunday and won their 23rd consecutive home game against an unranked opponent.

LAHAINA, Hawaii (AP) —Justice Sueing scored 23 of his career-high 33 points in the second half to help Ohio State hold off Texas Tech for a win in the fifth-place game in the Maui Invitational.

Sueing scored 15 points in a row for the Buckeyes in the last 10 minutes to turn back the Red Raiders each time they threatened to make a run.

Ohio State (5-1) shot 52% from the field, made all 18 of its free throws and never trailed after the first two minutes.

Texas Tech (4-2) got a career-high 21 points from Daniel Batcho and 19 from Kevin Obanor.

No. 4 Arizona turning heads early in the season

Ballo, No. 14 Arizona beat No. 10 Creighton for Maui title