10 of the most spectacular casinos around the world

10 of the most spectacular casinos around the world 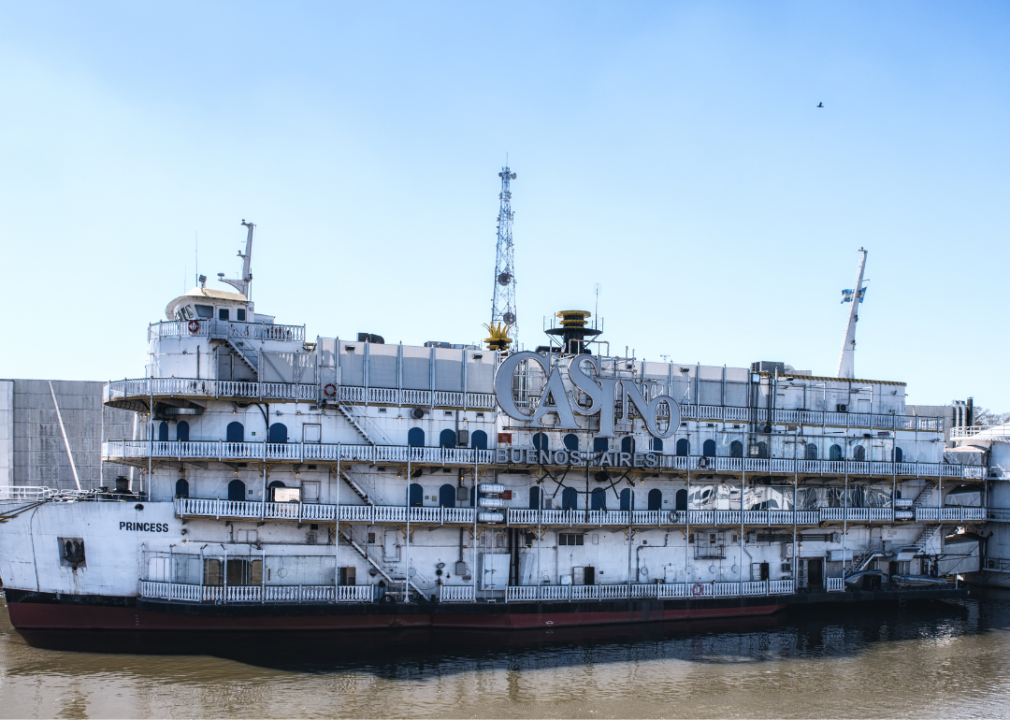 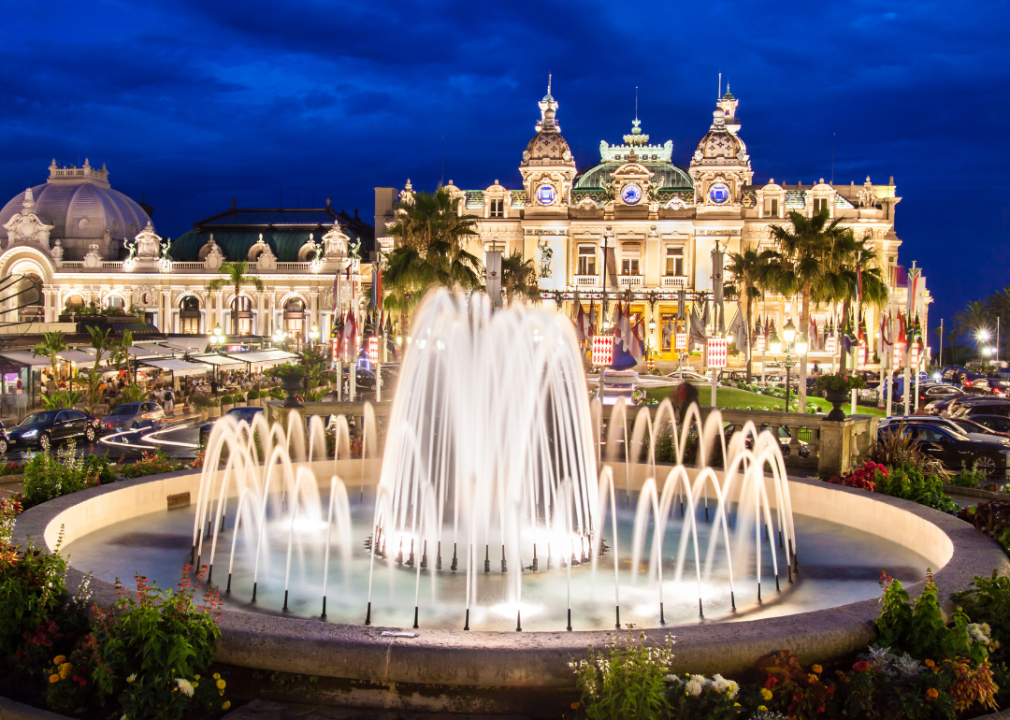 Gambling has existed for millennia and the first casinos opened for business some four centuries ago. But casinos are changing. Online betting is creating rigorous competition, so casino owners have pivoted to building dazzling edifices that are architecturally unique and offer far more than slots and table games.

OLBG curated a list of 10 of the most impressive and unique casinos around the globe. Most are casino hotels that offer up to thousands of rooms for not only gamesters but non-gamesters and families. Most feature an array of restaurants, including some of the best in the world, as well as state-of-the-art nightclubs, lounges, and bars. Some have swimming pools and luxury spas. Others even have an onsite golf course or two.

In short, most of these casinos offer complete vacation experiences that let you, say, golf in the morning, get a massage or hit the pool in the afternoon, dine in the evening, gamble at night, and then head to your luxurious guest room once you've (hopefully) hit the jackpot. You will likely find the new generation of casinos a safe bet—and an exhilarating choice for your next getaway. 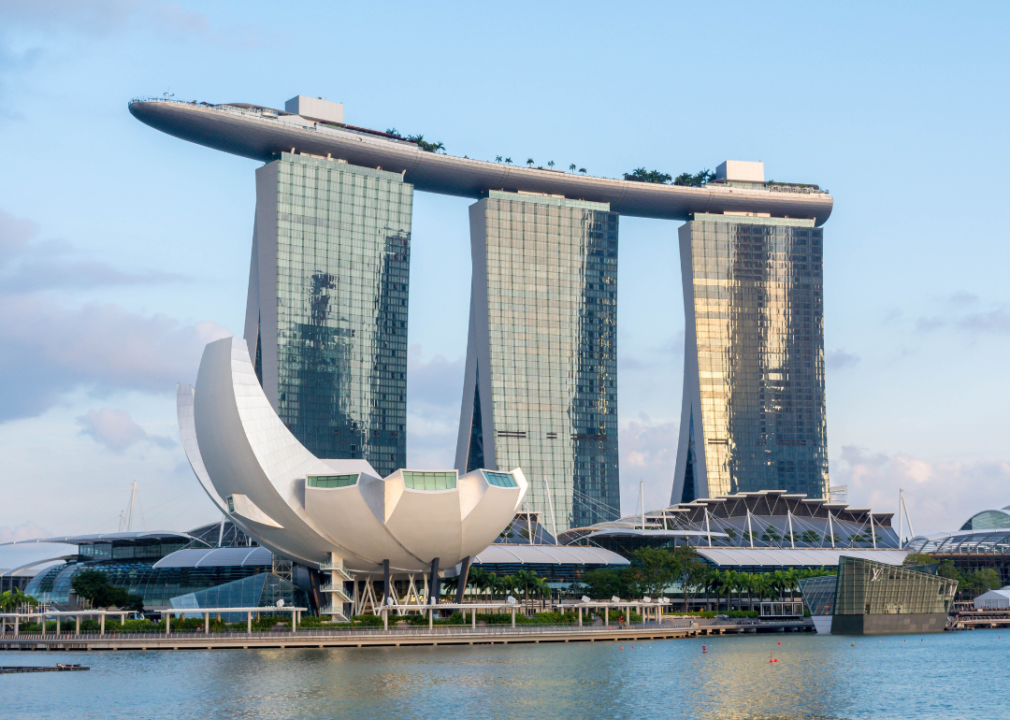 It's no surprise that this casino resort, which opened in 2010, was seen in "Crazy Rich Asians" and other films as it's arguably the most iconic building in Singapore. Equal parts hotel, casino, and rooftop park, it's an architectural wonder in the shape of the Roman Numeral III, appropriately composed of three towers housing 2,500-plus guest rooms. It's topped by SkyPark, a 340-meter-long park and observation deck laid across the top of the 57-story towers. While gaming enthusiasts like the casino's 1,600 slot machines and 500 gaming tables, other visitors can keep busy at the park (where there's a 150-meter-long infinity pool) and the resort's ArtScience Museum, skate rink, theater, shopping mall, and an astonishing 47 restaurants (several featuring celebrity chefs). 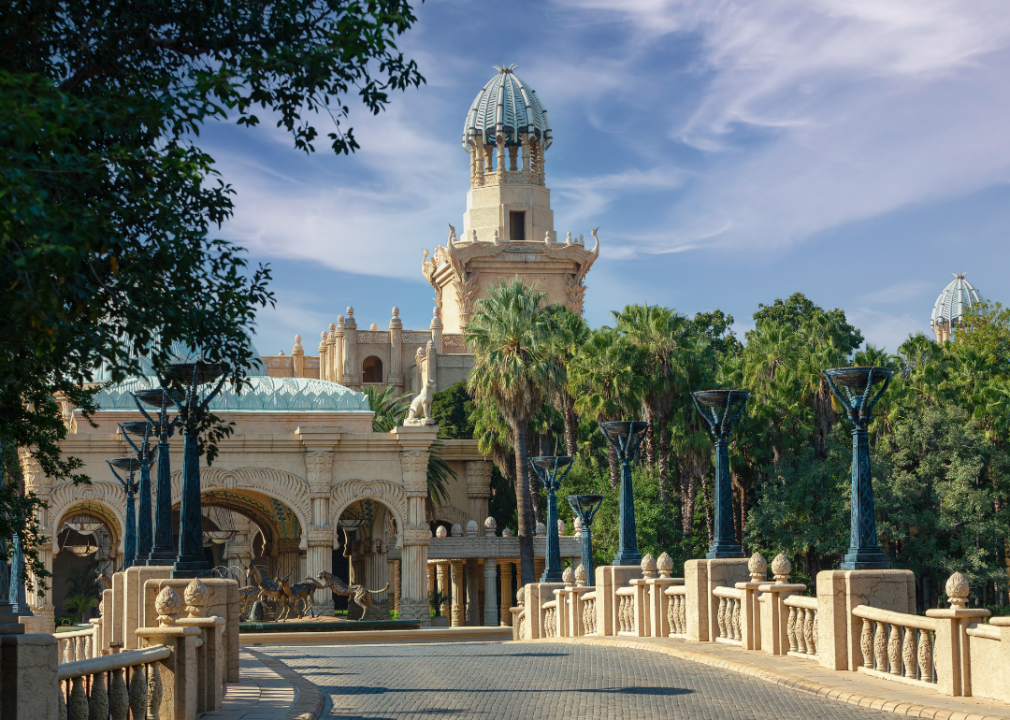 This casino stays open until at least 2 a.m. on weeknights and is open 24 hours on weekends, so you can try your luck at the slots or any of the 40 different table games whenever you want. Be sure to set aside time for everything else the resort has to offer. By day, options include two world-class golf courses, a world-class water park, two spas, two levels of family entertainment, mountain bike trails, water sports, tennis courts, and a visit to adjacent Pilanesberg National Park. Two dozen restaurants serve everything from Portuguese cuisine to kid-friendly fare. By night, you can patronize any of the resort's 10 bars and lounges (including three pool bars) before retiring to your luxurious hotel room. 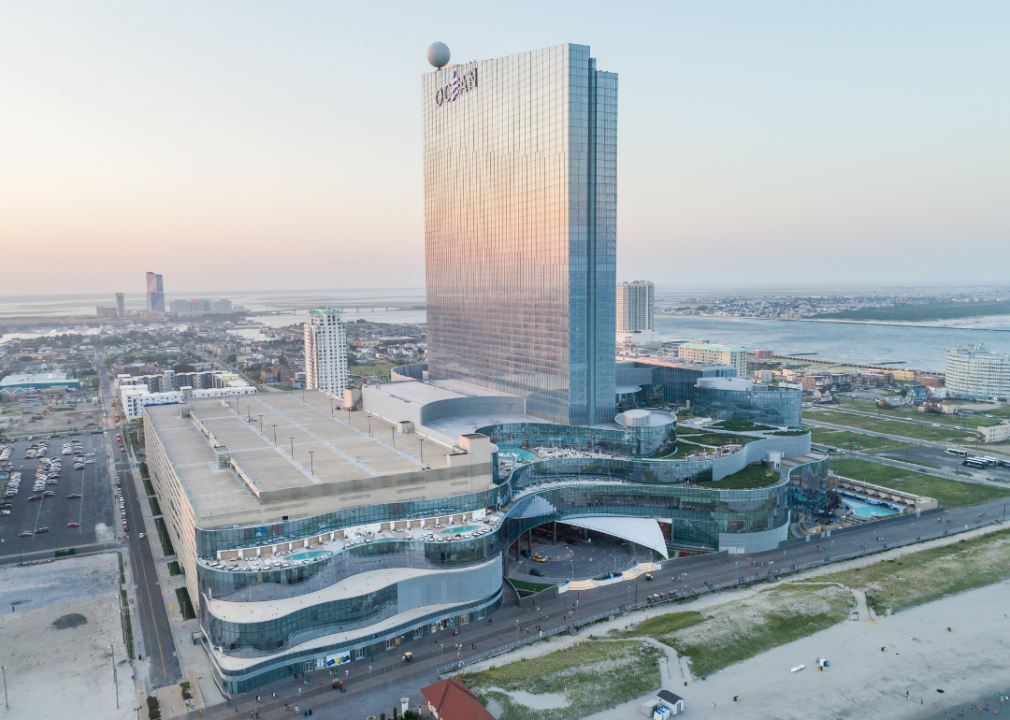 The proximity to New York City and the appeal of the beach boardwalk have lured people to Atlantic City for generations, and the Ocean Resort Casino will keep them coming. Gamesters love the 2,000 slots, 125 table games, and major sports-book operation. Guests love the four-diamond hotel (1,400 rooms); 20-acre beachfront property; 20 restaurants, bars, lounges, and nightclubs; ocean-view indoor/outdoor pool, and views from the tallest building in the city. Visitors can also attend Ovation Hall concerts (where Beyoncé has performed) or unwind at the Exhale Spa (voted best in New Jersey in 2021). The former Revel Casino Hotel reopened as the Ocean in 2018. 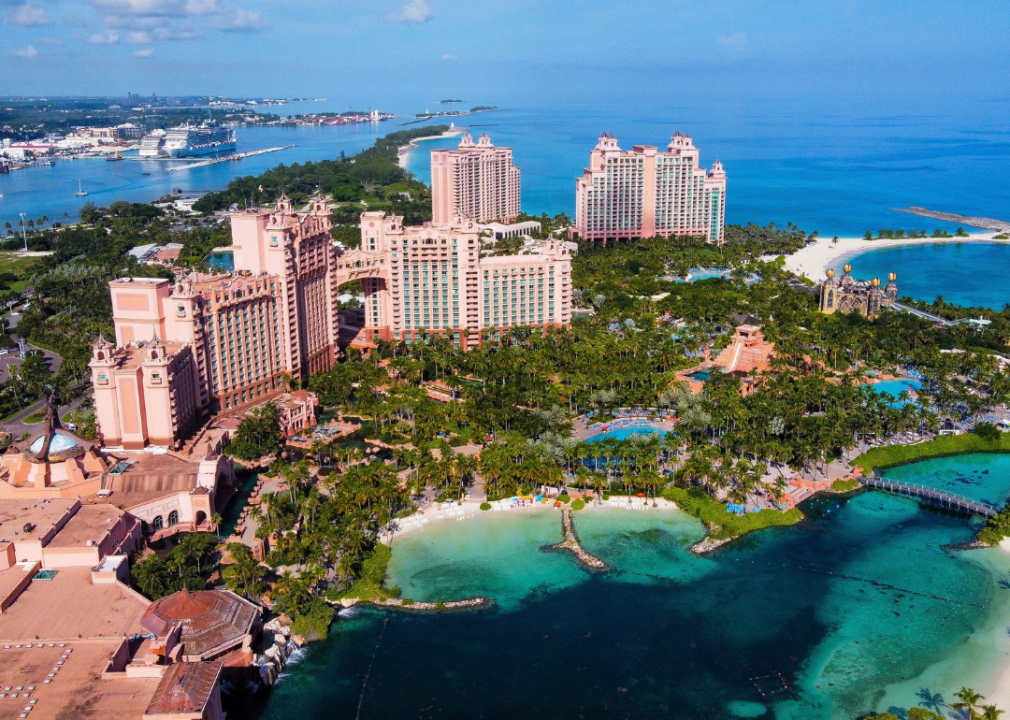 If you are seeking paradise (aren't we all?), you don't need to venture far off the Florida coast to find it. Atlantis is literally in paradise as the resort and casino occupy all of the Bahamas' Paradise Island. And, for those too young to have heard the 1968 Donovan song lyrics, Atlantis was a fictional utopian island mentioned in Plato's "Dialogues." But there's nothing fictional about the resort, which offers much more than gaming-with-a-view. Among the attractions are 40 restaurants, bars, and lounges; a massive water park; 11 pools; 5 miles of beaches; and a golf course. World travelers often name Italy and Switzerland their favorite destinations, and many find their way to this major casino on the Italian-Swiss border. Its history dates to 1917, but it's best-known today for the new building that opened in 2007: a nine-story, $200 million gem designed by Swiss architect Mario Botta, whose other projects have included major museums and churches worldwide. The multifaceted design offers views from many of its indoor and outdoor spaces of adjacent Lake Lugano and the steep mountains of Switzerland's Ticino region. Among those spaces are the top-floor music hall and seventh-floor fine dining restaurant. Closed throughout most of the pandemic, the casino reopened this year.

The Mirage may be a fitting name for a casino resort in the Nevada desert, but the only illusory feature is its signature "volcano," which "erupts" nightly as waterfalls pour off the side and cascade into a lagoon. When it opened in 1989, it was the world's most expensive hotel-casino and the first mega-resort on the Vegas Strip. Planned upgrades beginning this year will rebrand it as Hard Rock Las Vegas, which will include a 1,000-room, guitar-shaped tower and renovations of the 3,000-plus other hotel rooms and gaming halls. Completion is expected in 2025. Before that transformation is finished, visitors can enjoy the casino's nightclubs, restaurants, pools, gardens, artwork, dolphin habitat, and theater featuring A-list performers and Cirque du Soleil shows. 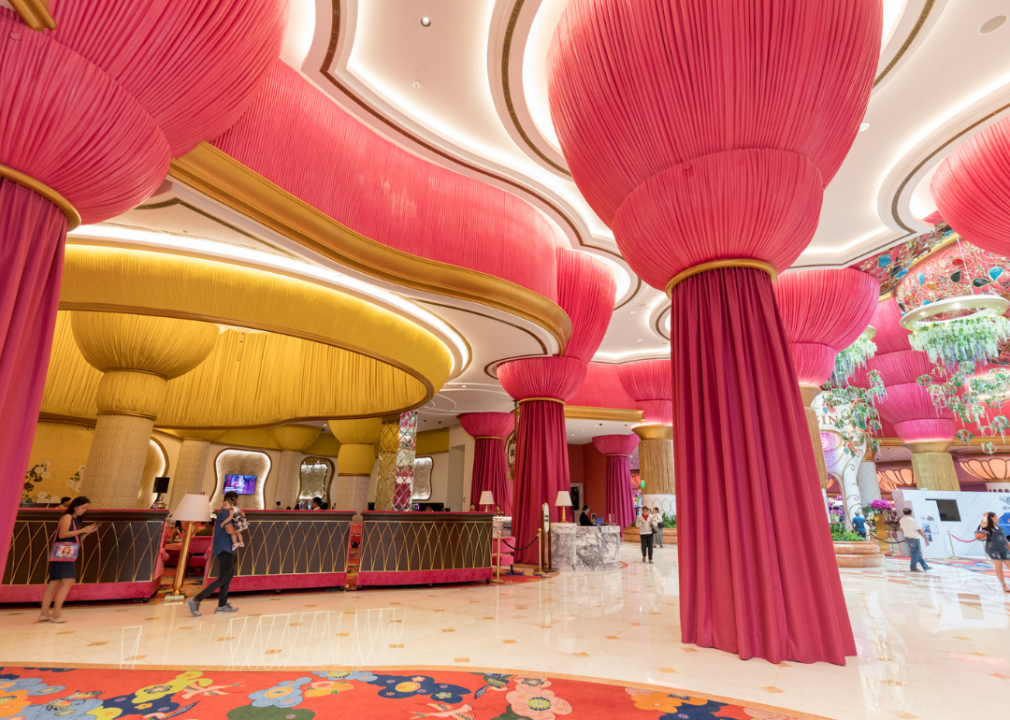 Debuting in 2016, this Forbes 5-star casino resort was built so that Manila's "Entertainment City" could take on Southeast Asian rivals Macau and Singapore as a top gaming destination. Located on Manila Bay, the water theme extends to one of the world's largest multicolored "dancing fountains," reflective pools, and a beach club. Inside are a lavish spa, luxury goods shops, fine dining restaurants with a focus on Japanese cuisine, nightclubs, and on the casino floors, about 500 gaming tables and 3,000 slots. Few casinos are as celebrated as this casino, which dates to 1856. "Classy" only begins to describe its pedigree. What other casino was proposed by a princess (Princess Caroline of Monaco) and reportedly received financial backing from a future pope (Leo XIII)? And what other casino is partially owned by its nation's royal family or shares its building with an opera house? Designed by the same architect, Charles Garnier, who designed the Paris opera house, the sumptuous interior has made it a favorite film location, including for James Bond movies. Besides gaming, the casino has two fine dining restaurants, Le Salon Rose and Le Train Bleu, and two elegant lounge bars. 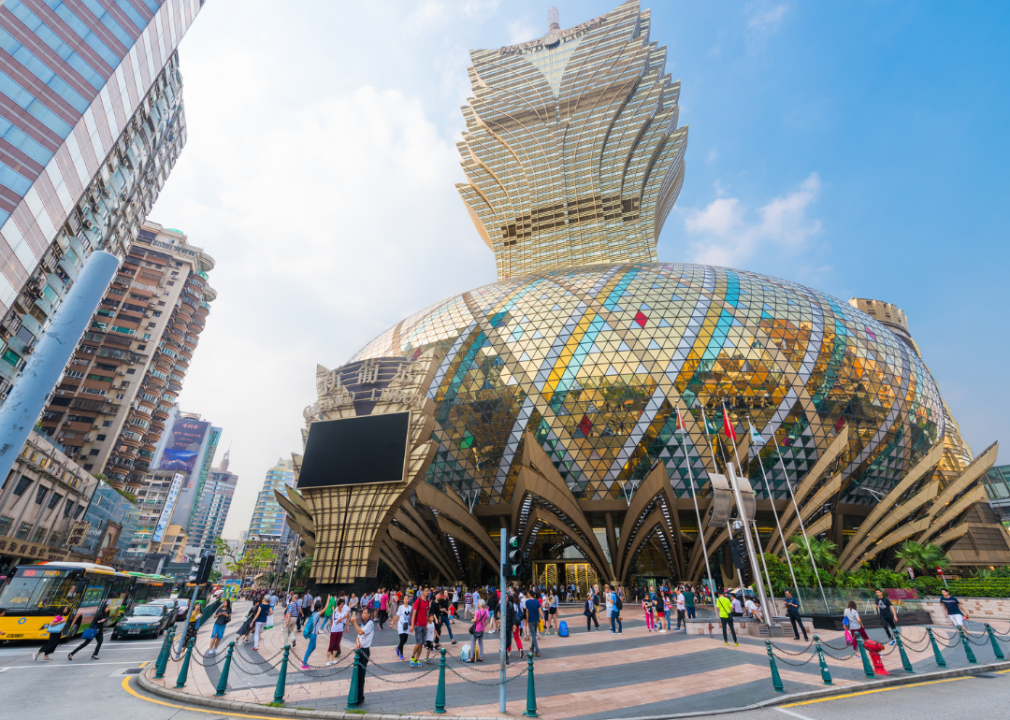 Macau is often called the Vegas of the East as it's gone "all-in" on gaming—so much so that gaming is an even bigger industry there than in Las Vegas. The grandest of its hotel-casinos is the Grand Lisboa, a name that pays tribute to Portuguese rule (Lisboa is the Portuguese name for Lisbon). It's distinctive not only as Macau's tallest building but for its design—flaring and layered as it rises 47 stories into the sky. The signature restaurant, Robuchon au Dôme, is routinely ranked among the world's best, earning three Michelin stars for 14 straight years and Wine Spectator's "Grand Award" for its 17,000-label wine list for 18 straight years.

A dedicated poker room, 120 game tables, and 1,400 slots offer gamesters plenty of reasons to check out Casino Buenos Aires. But what makes the 1999 casino unique is that it's all on two boats in the city's port area. Think of the Missouri Belle in "Ozark" on a much larger scale (minus Marty and Wendy Byrde). The four-level Star Ship has table games and slots that accept dollars, plus a VIP room. The Princess Ship features more slots and a poker room. The ships are replicas of the "floating casinos" that once plied the Mississippi River in the 1800s.

This story originally appeared on OLBG and was produced and distributed in partnership with Stacker Studio.

‘Consideration of Color’ to open at Royse Contemporary

Hague: Make your own rules

The popularity of Sagewood retirement community in Paradise Valley is apparent with its recent award for occupancy, new hires and engagement of resident groups and activities. Occupancy …